Farewell to a Faithful Society Member

It was with heavy hearts that we learned of the death of our friend, mentor, and leader Alice Zawadzki on June 30, 2015.

Those who knew Alice, or ever saw her, remember her for her unique style: a different color, head to toe, for each month of the year, and royal blue for traveling. She was a free spirit with a giant hug for friends and strangers alike. More importantly, in addition to her faith and her love of folk dancing, was her commitment to the native flora of North Carolina, and more particularly, her passion for rare plant conservation. She was a self-avowed "idea person," charting a path for others to follow and never hesitating to get involved in discussions that she thought would advance any efforts to preserve the natural beauty of North Carolina.

Alice took the leadership of the then N.C. Wild Flower Preservation Society and moved it into the 21st Century with a name change (N.C. Native Plant Society) and a focus on plant conservation. She “grew” the idea of NCNPS chapters across the state, and her vision took an existing group in the Southern Piedmont and expanded the plan to become chapters in the Triad, Triangle, SE Coast, NE Coast, NW Sandhills, Western NC and the newest in the Blue Ridge.

As NCNPS President, she was one of the initiators of what has become an annual event, the Rare Flora meeting. She encouraged and supported the NC Plant Conservation Program, and urged the founding of the Friends of Plant Conservation. NCNPS, under her leadership, donated the funds necessary to create the Friends group. She was a tireless member of the Friends of State Parks, serving on their board of directors for many years. More recently, Alice joined the board of directors of the Friends group, with a commitment to forging a strong bond between FOPC and NCNPS. As with everything she undertook, it was all or nothing, as she eagerly sought her niche in the organization.

She was a tireless voice for the natural world, to paraphrase Johnny Randall, and a mentor to any who shared her passion. She will be missed by many, and remembered as we see her above, in blue, in the field, and with her mother. She leaves her mother and two brothers in New Jersey.

Farewell to our friend. 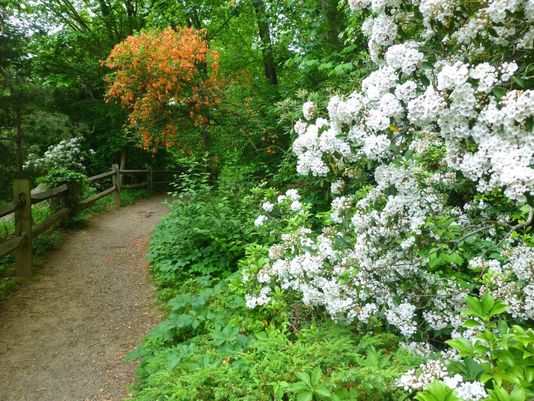 On Nov. 13, 1960, a meeting was held that led to the creation of the Botanical Gardens at Asheville.

By the time of the meeting, plans were already underway to develop a botanical garden on a 10-acre tract of land along Reed Creek that had been set aside by the college’s Board of Trustees at the new campus site. In 1961 the college moved to the new campus, which is the current home of UNCA and the Botanical Gardens at Asheville.

At the meeting, Asheville-Biltmore College president Dr. Glenn Bushey paid special tribute to Bruce Shinn, who prompted the newspaper to editorialize on the need for a public garden, and Cornelia Ann Serota, a biology professor who approached the college with the idea. Gertrude Ramsey was selected as the organization’s first president and Doan Ogden was selected to serve as the landscape architect for the new gardens.

Milkweed or Cattail stalks can be used to make a strong rope from their fibers once the pulp is removed.