Robert Thornhill led a field trip to the savanna at Shaken Creek.  The NC Natural Heritage Program calls it “the most biologically diverse savanna community site” on the east coast.  Robert is a master’s student in plant biology at NC State and 2011 winner of a NC Native Plant Society Shinn Grant Award for his work on the plants and soils of Shaken Creek Preserve.  Our dues and gifts go to support critical research such as this!

Robert Thornhill introduces the group to the history of the preserve and of this savanna.

The preserve was owned by a hunting club which retains the hunting rights. The savanna was kept open by burns.

The white spires of Northern White Colicroot, Aletris farinosa, rise above the grasses.

Shaken Creek is the only place in the state with four federally endangered species - Cooley's Meadowrue, golden sedge, rough-leaf loosestrife and red-cocakeded woodpeckers. 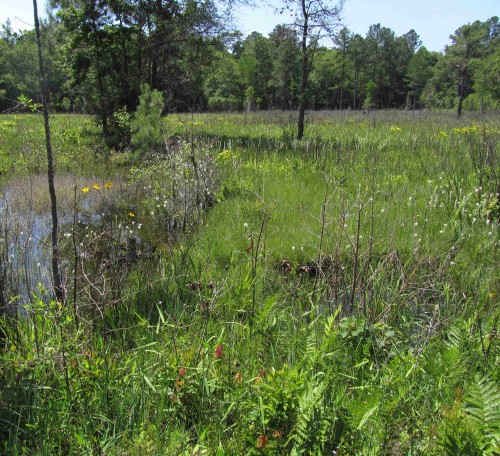 Another view of the savanna 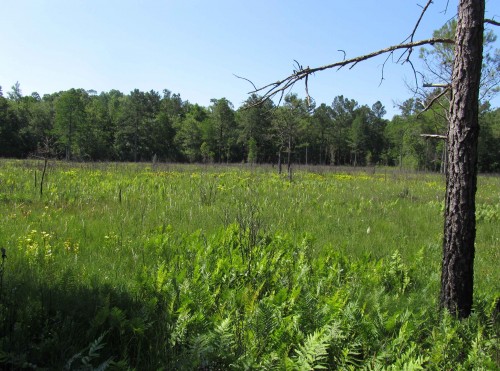 Savanna Meadow Beauty is identified by its smooth stem up to 3' tall, opposite lanceolate leaves and large flowers. 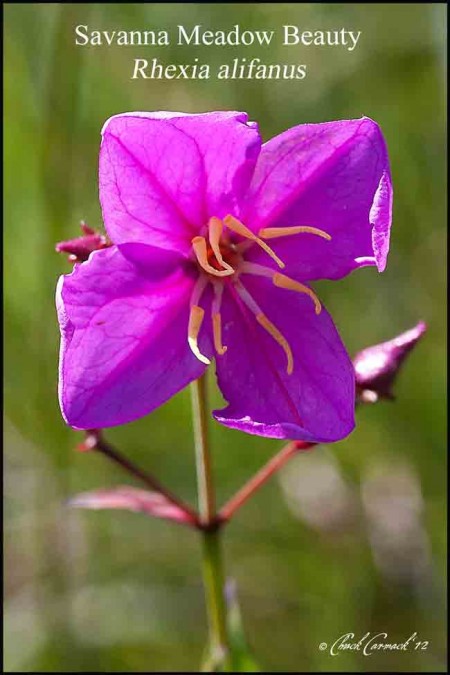 Thanks to Chuck Carmack for many of the photographs in this gallery.

Uncommon in our area, this is our only yellow Meadow Beauty. 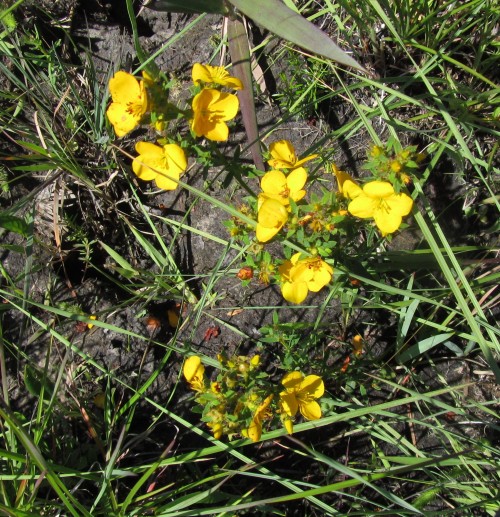 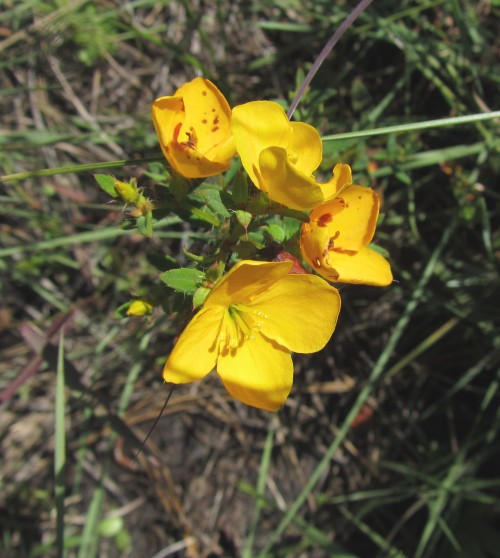 Savanna with Pitcher Plants and Colicroot 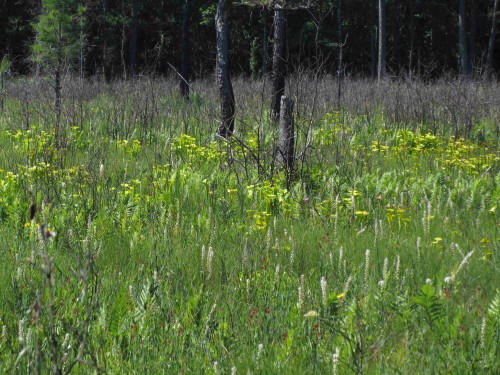 Note the powdery coating on the flowers which give the plant its species name (farinosa means "mealy"). Click on photo to enlarge. 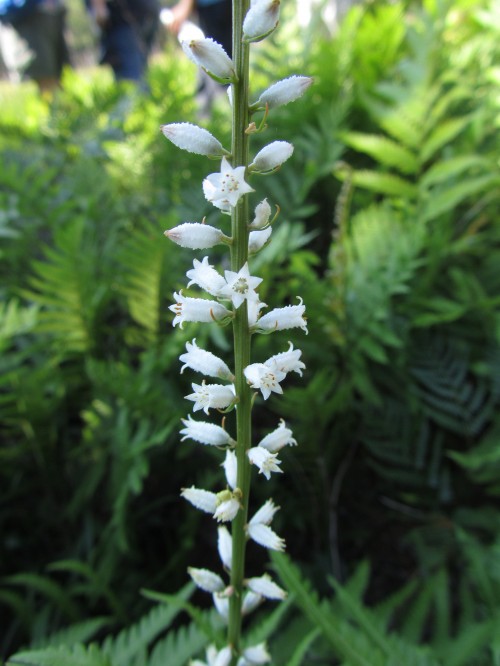 Despite the name, this beautiful flower is uncommon on the coast, rare in the piedmont and mountains. 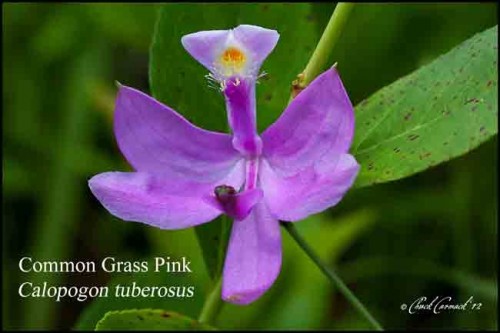 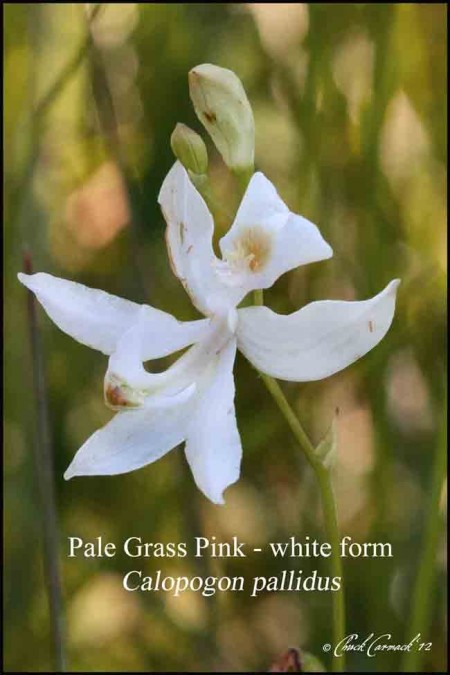 An early bloomer, Crow Poison was just finishing blooming. In full bloom, it has a dense, conical inflorescence on a stem that can reach 5 feet. 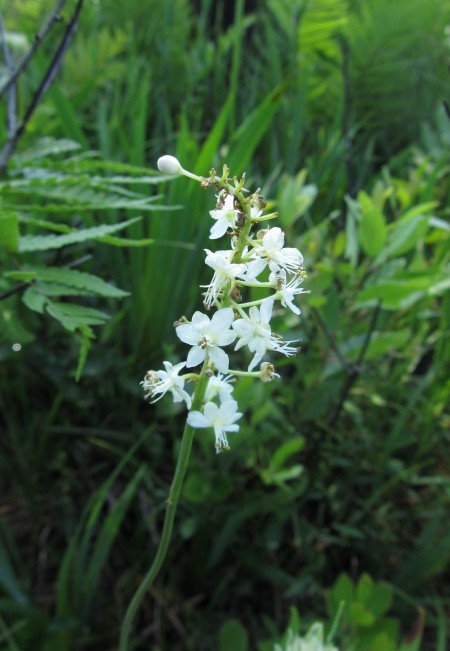 Hooker's Milkwort is rare and disjunct in the Carolinas. The main population is in the East Gulf coastal plain. 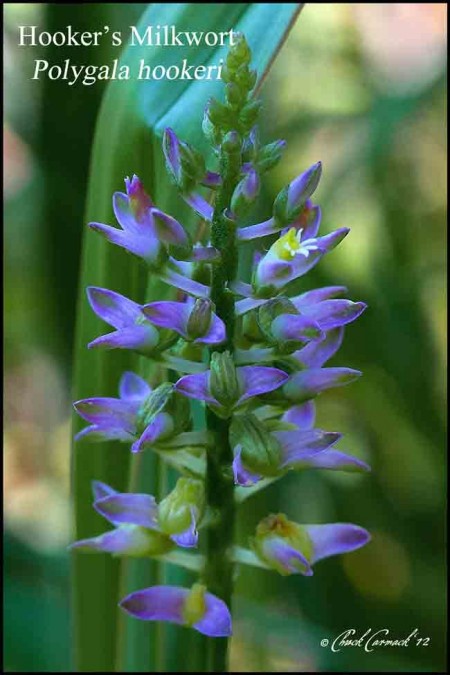 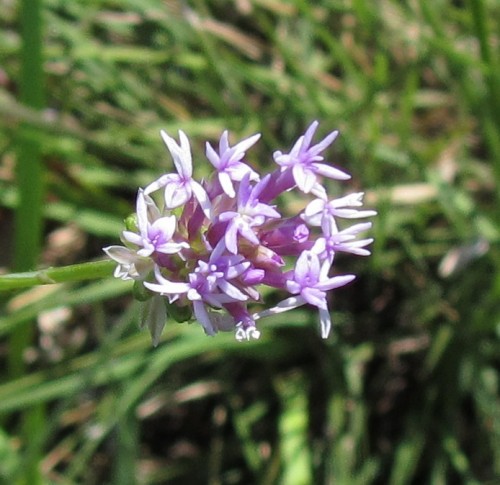 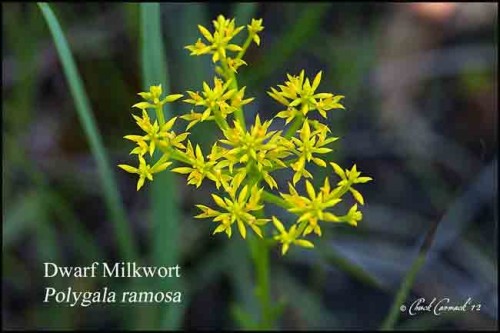 With thread-like stem and flowers less than an inch, this is one of several small Lobelias in our area. 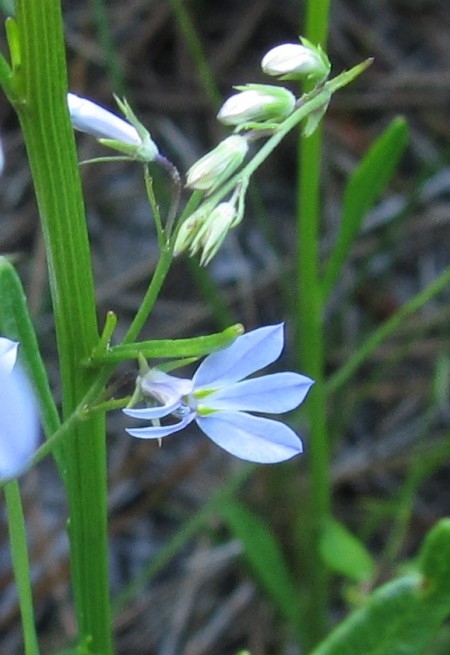 Uncommon in NC's coastal plain. The common name (obedient) comes from the stem which tends to hold its position when gently bent. 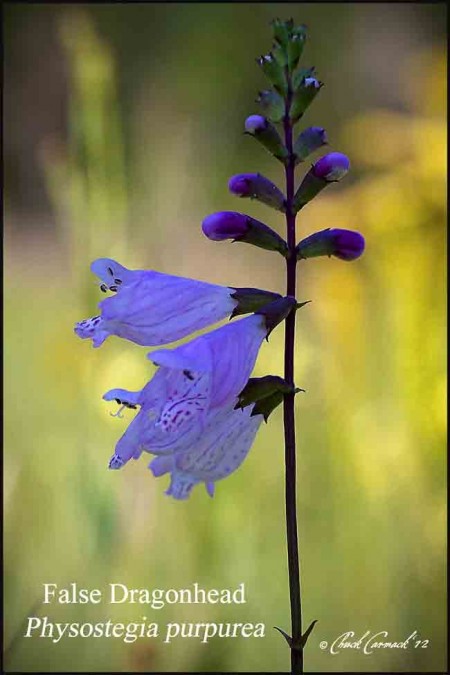 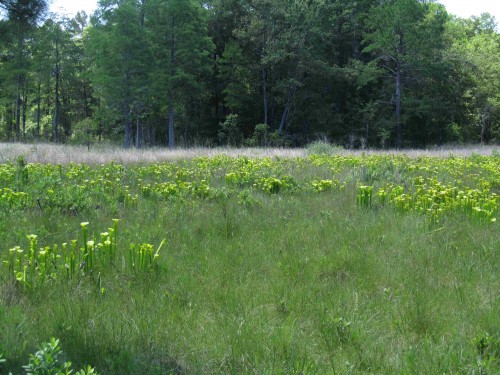 Looking closely, note on most of the plants the band of red/purple spots where the hood constricts. Click to enlarge. 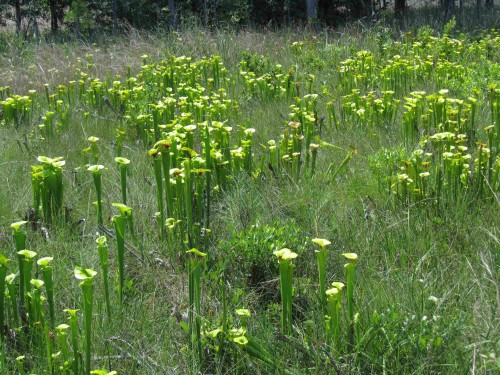 A closer look at the trumpets

The foul-smelling digestive liquid produced from the inside base of the pitchers attracts insects and contains enzymes that digest them. Some insects, including some species of mosquitoes, are immune to the enzymes and can breed in the pitchers. 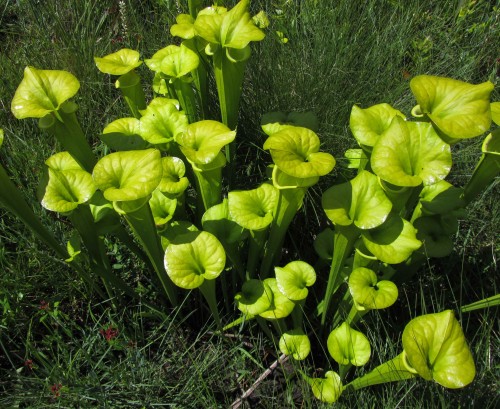 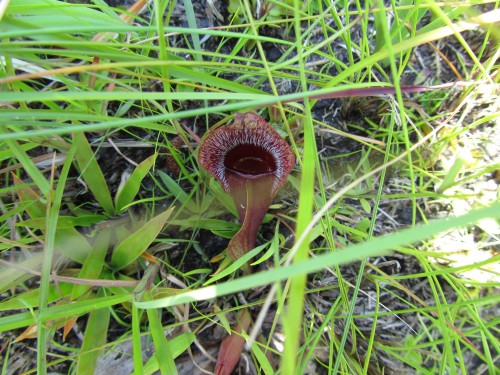 Two insectivorous plants sharing space. The tiny drops of sweet, sticky secretions that glisten on the leaves of Sundew both attract and capture small insects. The plant then secretes enzymes to digest the insect and absorbs the nutrients. 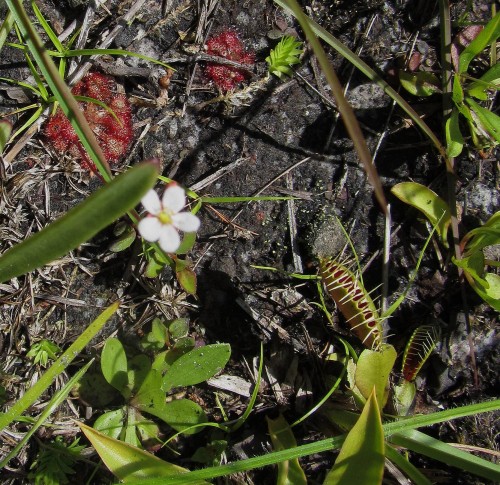 Most famous of all local insectivorous plants! 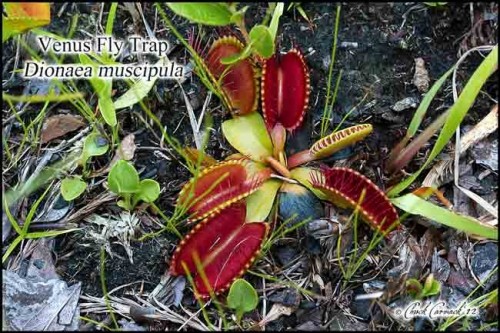 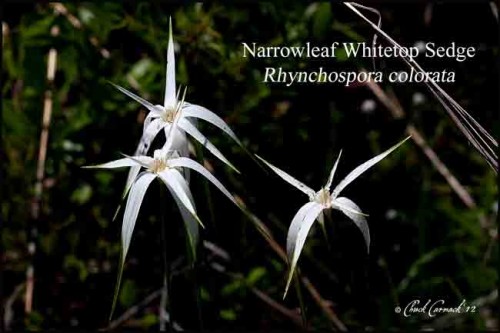 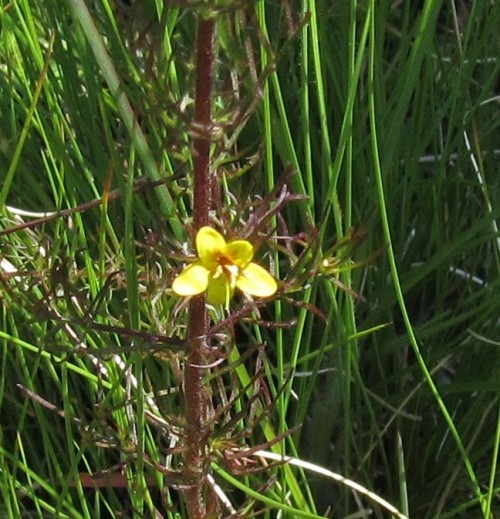 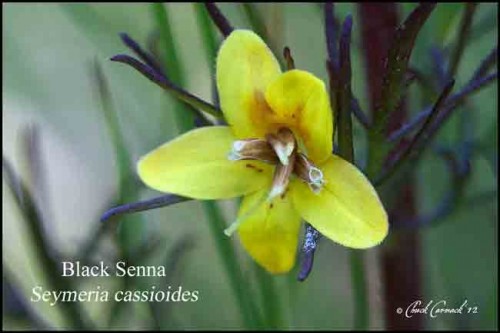 Uncommon in NC and found only on the coast, Savanna Iris can be distinguished from the more common Southern Blueflag Iris by its later bloom time and by the three narrow petals which barely rise above the three broad, showy sepals. 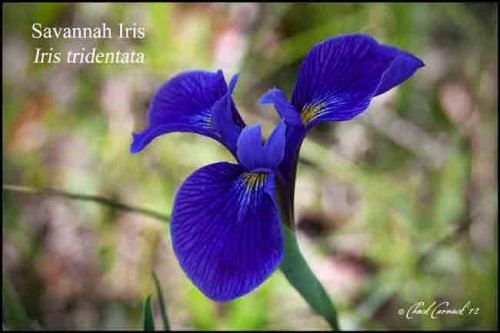 Robert points out Golden Sedge, federally listed and state endangered with a G2 status (globally imperilled), Found only at five sites within Pender and Onslow counties, all of which occur within a four-mile-wide area (LeBlond 1994). There are eight populations (one of which contains two subpopulations), with less than 800 individuals total (Ratzlaff 2002; LeBlond 1994). The best way to see this rare plant is with binoculars or a camera with a zoom lens! It is a signature plant of the very rare habitat (Pine Savanna Very Wet Clay Variant) protected within Shaken Creek preserve.

Many thanks to Robert for sharing his expertise and enthusiasm for this beautiful preserve.  Thanks also to The Nature Conservancy for arranging the walk and for their critical role in preserving North Carolina’s best habitats.